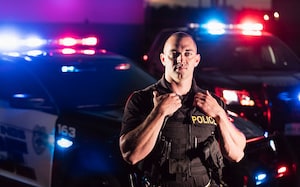 Everyone now has phones with cameras, and the world is not necessarily a better place as a result. For example, we’ve seen huge declines in topless sunbathers in France, for fear that “you can end up topless on your own Facebook wall.” [ See “The Real Reason French Women Have Stopped Sunbathing Topless, The Guardian, Morwenna Ferrier, July 28, 2014] This is sad development, indeed.

Modern technology is now in the hands of the police. No, I’m not speaking of mine-resistant ambush protected armored vehicles (MRAPs)–police departments actually own such things–but I’m talking basic, cheap technology–like video cameras. Some police now have video cameras in their police cars, and “body cams” on their chest. Is this a good thing? Yes, and no. Here’s why. Video not only protects citizens–video can reveal the truth (who could possibly be against “truth”?). Video also provides accountability, and, it may even tame the nasty customer service skills of some officers.

When I started defending criminal cases back in 1993, the Orange County Sheriff’s Office began experimenting with video cameras in patrol vehicles. Guess what happened? We defense attorneys started winning more DUI trials. Why? Without video, the officer (shiny badge and trained to testify) went before the jury and describe the defendant’s drunken state. The jury leaned in, and believed every word. With video, the jury was no longer required to “take the officer’s word for it”. They could see it for themselves, and the drivers looked far better than the officer’s description. So, guess what? The sheriff’s office pulled all the video cameras from their vehicles. Well, almost all. Through some miracle of science, an occasional DUI video would pop into existence out of nowhere–but only if the driver was falling down drunk, vomiting. Yes, vomit was about the only thing video taped by early dash cams, and they came out of nowhere. Hey, I guess if some people believe our gigantic universe popped into existence from nowhere, how hard is it to believe that a tiny little video can come from nowhere?

The good news is, times are changing. There are more videos than ever. Unfortunately, some police officers have learned how to work the video system. The new trick is to testify on the video to things that can’t, necessarily, be seen. A few common catch phrases are:

“I saw the dope, where did you hide it?”

“It’s Coming Right For Us” – South Park episode, in order to avoid Colorado hunting laws, hunters can shoot animals out of season in “self-defense”, so Cartman and the gang are taught to yell “it’s coming right for us” before every shot fired. No, this isn’t really related to the topic of the day.

Unfortunately, these officer’s false video monologues often succeed in tricking prosecutors and judges alike, who are all too eager to believe every word an officer says (and I believe most of what my clients tell me, just to balance out the equation). Wouldn’t it be nice if we citizens played these camera tricks as well? How about something like “is that alcohol I smell on your breath, officer?” Roadside videos could transform into sparing matches between the officer and the citizen, to see who can make the worst claims about the other person that cannot be verified on video. Fun for the whole family.

Anyway, the problem with body cams is that the police are, 99% of the time, here to help us. They are community caretakers, and body cams may have a negative impact on law enforcement’s community caretaker role. When an officer responds to a call involving a teen rape victim, how can that officer respect her privacy with the cameras rolling? Sure, we defense attorneys want video of the “initial accusation” (well, maybe we don’t), but this must be balanced with law enforcement’s need to show compassion to a hurting public. I’m not sure what the answer is. There are numerous jobs involving employees who are videotaped non-stop. The Seminole County Courthouse, for example, has every courtroom wired for constant video. The judges, bailiffs, prosecutors, and court clerks have their every move videotaped, every day. It seems to work fine for them…