A Loophole for Felony Driving on a Suspended License 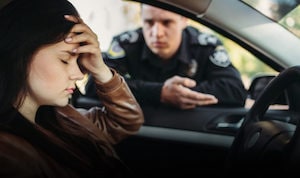 Driving on a suspended license (DWLS) is a progressive disease. It starts small, but often grows into a prison term. Here’s the pathology: a citizen gets caught driving without a valid license. A cop issues a citation. But, as luck would have it, the person gets caught driving a second time without a valid license. Then this same person gets caught driving a third time. Once a driver has three convictions for driving on a suspended license, you have now officially caught the attention of the Department of Motor Vehicles (and that, my friends, is never a good thing). At this stage, the DMV will issue what is called a Habitual Traffic Offender (HTO) suspension for five years. If a driver is caught a fourth time driving on an HTO suspension–this is a felony offense, carrying up to five years prison.

So, how do you go to prison for driving without a valid license? Basically, do it four times. Sure, I’ve bailed clients out of numerous DWLS charges, so you might find people out there who have been caught over ten times driving on a suspended license. I’m bragging, but there’s also a point to it. Some drivers get caught over four times, and are never given an HTO suspension–and–are never stuck with a felony DWLS charge. Other drivers get caught four times, and they go to prison for felony driving while license suspended as a habitual traffic offender.

Now, let’s say you’ve worked hard to learn how to drive, daddy taught you well, so you passed the driving test, and passed the written exam. Congratulations, you have a driver’s license. Let’s further assume that your license got suspended somehow, and you get caught driving. You’re not charged with the “driving with no valid license” mentioned above, you’re charged with “driving on a suspended or revoked license”. Do this four times and you can become a felon. But, your friend that never bothered to get a license in the first place wouldn’t be a convicted felon, he would only be guilty of driving with no valid license, a misdemeanor. Hum. 5 years prison versus 60 days jail. Why is the punishment so lean for folks who have never had a license? The secret is found in Burgess v. State, 2016 Fla. App. LEXIS 13279 (Fla. 2nd DCA 2016).

Burgess appealed his conviction on a third degree felony for driving while his license was revoked as a habitual traffic offender. He received a five year prison sentence. Yes, that’s right. Five years in prison. You didn’t believe me when I said drivers “can” go to prison, did you? Yea, that will never happen to me. I’ll never get old. Never get cancer. Bad things happen to other people, right?

Burgess had a simple complaint on appeal: how could he be convicted for driving on a suspended “license” if he never had a license to be suspended in the first place?

Here’s what the court had to say: “On its face, section 322.34(5) (making it a felony to drive as a habitual traffic offender) created an offense that can only be committed when a defendant who was issued a driver’s license has had that license revoked because he or she is a habitual traffic offender. Because a “driver’s license” is a defined term referring to a physical certificate authorizing a person to drive, it necessarily follows that a defendant who has never been issued such a certificate cannot be convicted under this statute because a license that was never issued does not exist for the purposes of revoking it.” id at 7.

You see where this is going? Do you think Burgess is going to have to serve all of his five year prison term for this? Nope. The court went on to say that there is no “reasonable reading of the statutory definition of ‘driver’s license’ that refers to anything other than a certificate authorizing a person to drive. A habitual traffic offender who never had such a certificate may be guilty of the second-degree misdemeanor of driving with no valid license, but he cannot under the plain statutory language be guilty of the third-degree felony of driving with a license that never existed yet was revoked because he was a habitual traffic offender.” id at 9.

Depending upon where you live in Florida, the holding in Burgess may be valid or invalid. In Central Florida, where I practice, the courts disagree with Burgess, and that position is found in State v. Bletcher, 763 So. 2d 1277 (Fla. 5th DCA 2000). The Third District agrees with Burgess, and you can find their agreement in State v. Miller, 193 So. 3d 1001 (Fla. 3d DCA 2016). The Fourth District agrees with Bletcher, and you can find their opinion in Newton v. State, 898 So. 2d 1133 (Fla. 4th DCA 2005). There is so much disagreement with the State of Florida on this issue that several of these courts have petitioned the Florida Supreme Court to take up the issue once and for all. I’ll keep you posted in the meantime.