Carrying a Concealed Firearm Has Its Limits 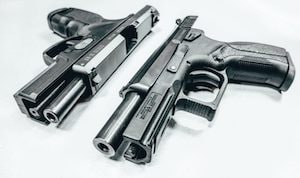 Orlando has seen its share of firearm charges, though Chicago has us beat by a factor of one bazillion. Keeping with the real estate slogan “location-location-location”, all these firearm charges often arise from three different locations– firearms found within cars, firearms found on a person, and firearms found within a home. The most common felony charges involving “possession” of a firearm are possession of a firearm by a convicted felon, and carrying a concealed firearm.

Location matters. Take the crime of driving while license suspended with knowledge (DWLS). Should you get caught driving in your driveway or backyard–there’s no crime, it’s private property. However, take the example of Driving Under the Influence (DUI). Of course, it is illegal to drive under the influence on the public roads of Florida, but what if you’re simply chilling in your garage, listening to the radio, drunk? That’s illegal too, because a DUI can be committed anywhere, a DWLS cannot. Location matters on a driving while license suspended, but it does not matter on a DUI. So, what about carrying a concealed firearm?

Let’s take a look at the real life example found in Santiago v. State, 77 So.3d 874 (Fla. 4th DCA 2012). Santiago was busted at his home when he sold cocaine to an undercover officer. And, in case you haven’t seen many drug deal movies, Santiago must obey drug dealing customs by pulling out a firearm from his pocket and displaying it. A few weeks later, the officer searched Santiago’s home and found the same firearm that was concealed in his pocket. Santiago was charged with (1) trafficking in cocaine over 28 grams but less than 200 grams, (2) sale of cocaine while armed (As Seen On TV), (3) carrying a concealed firearm, and (4) possession of a firearm by a minor.

So, Santiago goes to trial, and he’s convicted of carrying a concealed firearm. He receives a ten (10) year prison sentence, and appeals the carrying a concealed firearm conviction. The jury gets the head-up play of the day award on this one, because during their deliberations, they write down a question for the judge: “Does ‘concealed’ apply to a person in his own residence?” Wow. The prosecutor and defense attorney didn’t want to answer the question directly and asked the judge to simply re-read the jury instructions, but the judge overruled the state and defense by issuing the following response: “Yes, concealed does apply. So, it is illegal for a person to walk around in their own home with a concealed weapon or firearm in the presence of other people”. Hum, I wonder what the appeals court will do with this one…..

Because the judge gave the jury a clearly wrong answer to their question, Santiago’s sentence was overturned.The appeals court correctly reasoning that Section 790.25 of the Florida Statutes permits a person to possess firearms inside his home lawfully–without the need for a concealed weapons permit. This protection even applies to a person’s business under some circumstances.

What an insightful jury question. You see, juries really do pay attention–even more so than the attorneys in this case, as this charge probably could have been disposed of with a simple Motion to Dismiss.