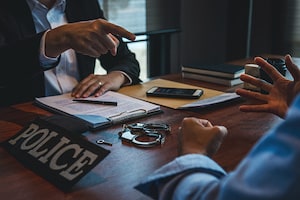 Once again, it seems like the juveniles are creating some good case law for defense attorneys. So, I find myself torn between having good case law (can’t put a price on that), and the insane amount of money our government wastes in the process. Anyway, let’s talk about B.B. v. State, 117 So. 3d 442 (Fla. 2nd DCA 2013), a case in which a juvenile was convicted of providing false identification to a law enforcement officer and possession of alcohol by a person under twenty-one years of age. Her criminal defense attorney moved to dismiss these charges, but the motion was denied, and this appeal resulted. Here’s what happened.

The Polk County Sheriff’s Office stopped a vehicle for speeding. When the car stopped, the driver took off running into the woods. This happens on occasion, no need to draw our guns here, just call out the expensive helicopters to make sure we spend $3,125 in chopper fuel costs to chase a misdemeanor suspended license charge. Even though the driver took off, there were two people remaining in the car, B.B. (a juvenile) in the front passenger seat, and another person in the rear seat. When the police asked B.B. her name, she lied, and gave them her sister’s name. Also, police found an open can of Four Loko in the console between the driver seat and passenger seat. In case you didn’t know, Four Loko is an alcohol/energy drink. For those instances in which kids don’t have enough energy to party until the break of dawn, this drink will get you there with energy to spare (supposedly). The cops on the scene decided not to conduct an investigation as to who possessed the alcohol, and simply charge B.B. with the Four Loko possession. Once again, stellar police work.

Here’s something you already know. Lots of money gets spent in the criminal justice system for stupid crimes. Are you getting your money’s worth? Sure, B.B. was arrested and maybe even taught a lesson, but that doesn’t make me feel any safer. And, you want to see tons of money down the drain? Take a closer look at Polk County Sheriff’s creepy obsession with busting prostitutes–under the guise of “curbing” human trafficking. Why stop violent crimes or drug trafficking, when you can bust some 32 year old single mother of two trying to give a “body rub” for $60 bucks? These moms must be stopped sheriff, please, spend thousands more, whatever it takes! Sure, tons of drugs are entering Florida, Mexican drug lords are sanctioning killings in our Florida streets Goodfellas style–but we’re too busy taking B.B. to jail and busting Backpage backrubs. By now, it should be a bit clearer as to why B.B. isn’t getting the education she deserves. Those “human trafficking” operations cost several teacher’s salaries per sting.

Anyway, the police transport B.B. to jail, and she is still working off her fake name. But all good things must come to an end, and the police figure out B.B.’s real name, so B.B. gets another charge of false-identification, under Florida Statute 901.36(2). Now, you’ve got to watch the ball closely here, and I’m going to run this charge in slow-motion for you so you can see what a waste of money it is.

Section 901.36(2) doesn’t make it illegal to use a false name all by itself–the use of that false name must be to the detriment of someone else. When the use of the name results in adverse consequences to the fake named person, you’ve got a third degree felony conviction. Florida Statute 901.36 comes in two flavors, misdemeanor, or felony. Subsection (1) is a first degree misdemeanor, and the only thing that’s needed for a conviction is for the person arrested or detained to give the police a false name. So, how many cops out there are satisfied with a misdemeanor when there’s a felony option? Just like clockwork, they hit B.B. with a third degree felony charge, and that’s found in subsection (2) of 901.36, and it reads that if a person is guilty of subsection (1) and such act “results in another person being adversely affected by the unlawful use of his or her name. . . [said person] commits a felony of the third degree.”

A felony for using a false name? It offends me that prosecutors even waste taxpayer money proceeding on such cases with no evidence. Offends me, but doesn’t surprise me, of course. After our government spent money taking B.B.’s case to trial, the appeals court found that “the State provided no evidence that the citation resulted in adverse consequences to [the fake named person].” Id. The state attempted to prove this charge by showing the court that the initial paperwork was written up under the fake name. Naturally, this paperwork was still not enough to prove that someone suffered adverse consequences as a result.

Now, what about the possession of alcohol by a person under age twenty-one? Sure, another colossal waste of money that could have been avoided with a phone call to the parents (yea, I know, I’ve worked juvenile before–not that many parents around, I get it, but how about trying to call grandma, at least?) There were two problems with proving this charge. The first problem is obvious, and we talk about it all the time–constructive possession. B.B. was in a car with two other individuals, so proving this possession case (no matter what she possessed, marijuana, cocaine, heroin, or alcohol) requires the state to prove B.B. “had knowledge of the illicit nature of the alcohol”. Id. The court reasons that, “to meet its burden, the State must present evidence that the Four Loco can found in the vehicle actually contained alcohol.” Id. But, the “State’s case lacked any evidence identifying the substance inside the can. The deputy did not perform a Breathalyzer test on B.B., nor did she smell, test, or otherwise examine the liquid in the can to determine whether the beverage was alcohol. Both the can and its contents were disposed of.” Id. So there you have it, both charges overturned by the appeals court, tons of money wasted. The lesson is simple. Our government, via prosecutors and judges, have the ability–and obligation–to dump bogus charges before they get this far. I know plenty of prosecutors that do their job, but there’s always a few bad apples out there….