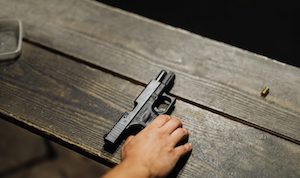 That’s right. If the government wants to build a highway–and your house is in the way—consider your home gone. They’re going to take it. It’s called eminent domain.

If the government thinks that you’re a harm to yourself or others, and again, you’re not accused of committing a crime, this is called the “Baker Act,” where the government can imprison you in a mental hospital for 72 hours against your will.

And finally, our topic for today. If the government wants to take your guns, even though they are not accusing you of any wrongdoing—this can be done. It is called a Risk Protection Order, and it’s found in Florida Statute 790.401. This statute was created in the aftermath of the infamous Parkland shooting.

A Risk Protection Order requires a citizen to surrender his guns and ammunition to the police for up to one year. This process begins when a police department or sheriff’s office files a request with the judge. Typically, the judge signs a temporary order requiring the citizen to temporarily give up all guns until the formal hearing can be held, and that must be held within 14 days. Sometimes, however, the police ask the judge to seize your guns, and the judge denies the police’s request, and in those cases, you’ll be noticed of a formal hearing within 14 days of this request.

The reason the police ask a judge to take away your guns is pretty simple—they have reason to believe that you are a danger to yourself or others. I’ve done these hearings before, and most of the time, the police come for your guns when they have heard from friends or family that a citizen is suicidal.

While the most risk protection cases involve someone who is a “danger to themselves,” the less common case involves situations in which the police believe a citizen will be a “danger to others.”

The burden of proof is pretty low for law enforcement to take your guns temporarily, as the police need only show “reasonable cause.” Almost any talk of suicide would seem to permit the police to obtain an initial “temporary ex parte risk protection order.” This means that the police can show up at your house one day unannounced and take your guns and ammo (and concealed weapons permit) without ever noticing you of their intentions upfront.

Once the government takes your guns under the temporary order, they cannot hold them for an entire year until they convince the judge to enter the protection order at the final hearing, held 14 days after the initial taking based on the temporary order.

At the final hearing, the police must prove by clear and convincing evidence that a citizen continues to pose a significant danger of causing personal injury to themselves or others in the near future. This is tough for law enforcement to prove.

There are plenty of ways to convince the judge that a person no longer poses such a risk.

For example, it is typical for a Baker Act proceeding to come with a side order of Risk Protection. This Baker Act can work in your favor—if you’ve been released days before the final Risk Protection hearing. The reason for this is simple. To be released from a mental hospital under a Baker Act, several mental health doctors must agree that you are no longer a threat to yourself or others. That’s how you’re released from a Baker Act hold. At your final hearing for the Risk Protection Order, you will be asking the judge to trust the doctors at the mental health facility over the hunches law enforcement may have had at the start of this case.

Even if the final hearing goes wrong and the judge sides with law enforcement and your guns are seized for the next year, Florida Statute 790.401 permits a citizen one petition during that year for the court to reconsider and give your guns back early. We can help you file early to get your guns back, but such a motion takes a bit of planning prior to making such a request.

So, if this has happened to you in Orange, Seminole, or Osceola County, please give our office a call, let’s see if we can help you out. We can defend these Risk Protection Orders, and even if the judge grants it, we can represent you to have the order removed before the one year is up. Thanks, John.