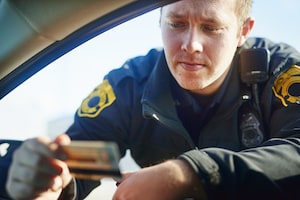 There is way too much personal information online.

So much so, in fact, that all this “freedom of information” and “transparency” simply makes it easier for criminals to steal your identity. No, I’m not about to launch into a Life Lock commercial, it only sounds that way. For example, there was a large identity theft ring that stole millions by pulling personal info from traffic citations.

Here’s how it works (no, I’m not going to tell you how to steal). It all begins with, say, a speeding ticket in Orange County. The Orange County Clerk of Court will publish a copy of that traffic citation for everyone to view (Yes, even the hackers in Russia can see it). If you’ve ever been caught speeding in Orlando, just type your name into the Orange County clerk’s search engine, and you’ll notice that a scanned copy of your citation is available for everyone to see.

Some of the juicy information provided by the clerk–free of charge–is the following:

Your Name. Your address. Your Driver’s License Number. Your Birthday. Your height. Your weight. Your race. The car you drive. Your tag number. What your signature looks like (must sign a traffic ticket, its a crime not to…)

Isn’t it creepy that someone in Russia may be able to figure out your height, weight, and what kind of car you drive just by logging onto the clerk’s system? So the question is, can our traffic citations be sealed from public view?

The answer is: Yes. Maybe.

The laws governing the publishing of this information are found in Florida Rule of Judicial Administration 2.420, entitled “Public Access to and Protection of Judicial Records.” As a general rule, a judge will not seal your speeding ticket just because you don’t want folks to know your birthday, address, or height. Remember, this is the Sunshine State, and there’s a heavy bias toward publishing records. But, a judge may be willing to seal a traffic ticket when that citation contains “confidential” information. If, by some chance, your citation contains such you’ll need to follow the rules laid out in 2.420 [it’s long and boring, sort of like this article, but Fl. R. Jud. Admin. 2.420 lays out the procedure nicely].

Also, a judge will seal a citation when it can be shown that the continued publication of this information would lead to some sort of harm (like when Casey Anthony was on probation, and where she lived while on probation was not published because her safety was at issue). If you were a victim of identity theft and can show that the traffic ticket information led to your identity theft, that may be enough to get a judge to remove those records from public view.

Keep in mind that we’re NOT talking about the sealing or expunging of a criminal record. Sealing and expunging a criminal case, or arrest, is a completely different animal and just click the link above to read more about it.

Also, our Florida Supreme Court has mentioned the judge’s power to seal a non-criminal record, like a traffic citation. In the case of Johnson v. State, our Florida Supreme Court acknowledged that, “from time immemorial courts have exercised their discretion, on their own initiative or upon motion of the parties, to seal their records from public view wherein the ends of justice may be served.” 336 So.2d 93, 99 (Fla. 1976).

So, if you want to seal an embarrassing traffic ticket for which you were never found guilty, your letter to the judge might look something like this: “Pursuant to this Court’s authority to seal its own records, Defendant asks this Honorable Court to seal from public view citation number GSX1399-A, and cites the Florida Rule of Judicial Administration 2.420, as well as the Florida Supreme Court’s opinion in Johnson v. State, which states that “from time immemorial courts have exercised their discretion, on their own initiative or upon motion of the parties, to seal their records from public view wherein the ends of justice may be served.” 336 So. 2d 93 (Fla. 1976).

As a side note here, the above procedure may work for sealing a domestic violence injunction or a stalking injunction (these are non-criminal civil proceedings in which a judge tells you to stay away from someone…).