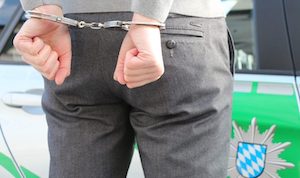 It seems like the government can search just about anything these days, as long as they can find a judge to sign a search warrant. But, the police may also search a citizen’s belongings without a warrant, under certain conditions. Today, we’re going briefly discuss one exception to the Fourth Amendment’s warrant requirement, searches incident to arrest.

It makes sense that the police should be able to search a person before he is placed into to county jail. After all, they don’t want folks bringing guns or drugs into the jail. But what is not so obvious is, how far can a search go once the person is arrested and we know they’re on their way to jail? May they search your entire car? May they search your cell phone? Let’s find out.

Historically, the most common search incident to an arrest was the search of a defendant’s car. Basically, if you were arrested for something as simple as driving on a suspended license, the police were permitted to search your entire vehicle after the arrest. Now you may ask yourself, why? Is it physically possible for a person who is handcuffed, sitting in the back of a patrol car, to access their potentially dangerous belongings within their car? Nope. It’s not.

Once there existed the United States Supreme Court’s ruling in Belton v United States, 453 U.S. 454 (1981) which stood for 28 years as a hallmark of legal fiction. Belton permitted searches of a vehicle incident to arrest because the Court reasoned that the passenger compartment was in the grasp of the defendant and searchable even though the defendant might well be handcuffed a good distance away and in the back seat of the squad car. This became a “readily administrative rule” which prevented the police from having to think too fast. So, just on the off chance that a handcuffed person locked in a patrol car could get into his vehicle, Belton permitted a search of the entire car.

Recently, however, the Court has abandoned Belton and calls it what it is, and always was, a farce. Instead, Arizona v Gant, 556 U.S. 332 (2009) has been substituted, a case more a line with reality. According to Gant, the police do not have the luxury of waiting until the defendant has been removed and is clearly not capable of retrieving the contraband. Police may no longer search a vehicle incident to the driver’s arrest. Instead, there must be some basis of probable cause for the police to be able to search the vehicle for items used in the crime. It is difficult, for instance, to justify the wholesale search of the passenger compartment for evidence of driving with a suspended license absent facts which would warrant the search. But if the car is stopped after leaving the scene of a robbery, it may be searched because the car may contain evidence of the robbery. But before Gant, Belton permitted such a search for no reason whatsoever. So, some progress is being made here.

Recently, too, the Florida Supreme Court decided Smallwood v State, 2013 WL 1830961 (Fla. 2013) which suppressed the images taken from the defendants cell phone which was on his person at the time of his arrest for robbery and which showed his girlfriend holding a wad of cash. It was determined that the defendant’s privacy interest in the pictures outweighed the government’s interest in the pictures. Again, if arrested for driving while license suspended, the police have some interest in going thru all the things in your pockets and purse before they submit these items to the jail. However, what interest do they have in searching thru your cell phone? None. As such, Smallwood has placed a limitation on the search of items found on a defendant when he’s arrested. That being said, I’ve had several clients threatened with enhanced charges–unless they reveal their cell phone code to the police (in one case, my client was charged with simple possession of cocaine, yet the officer made good on a threat to add “with intent to sell or distribute” if he didn’t give up his cell phone pass code. He did not give it up, and was arrested for possession with intent to sell or distribute. It was a good move not to give up the code, as we were able to dismiss the ‘with intent’ charge anyway.)

Has there been a shift in the government’s thinking with regard to searches incident to arrest? Smallwood does not appear to be novel. Rather, it appears to have been decided for the first time on its own merits. It is comforting to believe that the government has become more realistic, but it’s too early to tell. Let’s be happy with what we have.