The Core Mystery of Quantum Mechanics 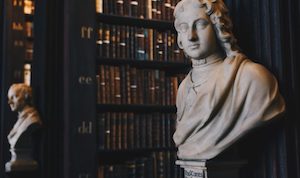 You know I love physics. You know I don’t understand it, but I do have some questions that need answering. Today’s mystery involves quantum mechanics. Here’s Richard Feynman’s observation:

“I think I can safely say that nobody understands quantum mechanics… Do you not keep saying to yourself, if you can possibly avoid it, “But how can it be like that?” because you will get ‘down the drain’, into a blind alley from which nobody has escaped. Nobody knows how it can be like that.”

It makes me feel a little better when a Nobel Prize winning physicist claims that nobody understands quantum mechanics, but surely, his lack of knowledge far exceeds most. With that in mind, let’s review the fundamentals.

Matter, at the most basic level, behaves in odd ways. Everything around us is made up of atoms, and those atoms are made of even smaller things, and it is the behavior of those smaller things that describes the field of quantum mechanics. Things like photons and electrons can behave as either a particle, or a wave. Actually, I suppose you could say that an electron may “be” either a particle, or a wave. If the electron is a wave, then it will be found in many different places all at once, and this odd fact has been verified through the famous double-slit experiment.

The double-slit experiment takes one single photon (or electron) and shoots it at two tiny doors, or slits. Behind the two slits is a detector which will display which slit the photon went through. So, if a photon is only a particle, you would expect the detector to show that the photon landed behind only one of the two slits. After all, one “thing” can’t fit through both openings. The problem is, when we shoot one photon at the two slits, a pattern emerges on the back wall detector. The pattern detected is one of interference–the kind of interference that can only be caused by that one photon going through both slits at the same time, and thus behaving as a wave. What’s even more confusing is the fact that, if you decide to detect which of the two slits the photon will go through, it will indeed only go through one of the slits–and thus a different pattern will be shown on the detector screen. Yes, the photon somehow figured out it was being measured, so it only goes through one slit while being measured (no way to determine which slit, but that’s another story).

Why should some physical part of the universe behave in a different way depending upon whether or not we decide to measure it? If you try to fool the photon by placing detectors behind the slits–the photon will still only register in one detector. So, how did the photon “know” that it would be measured once it got past the two openings? Again, with no detectors, the photon will go through both detectors simultaneously creating a wave interference pattern. Weird, right?

Let’s go back to Richard Feynman, who stated that this result “is impossible . . . to explain in any classical way, and which has in it the heart of quantum mechanics. In reality, it contains the only mystery [of quantum mechanics].” Feynman, Richard; Robert Leighton, Matthew Sands (1965) The Feynman Lectures on Physics, Vol. 3. pp. 1.1 – 1.8

Now I’m going to be that pesky kid in the college physics class, raising my hand with lots of stupid questions.

First, what physical process takes place that forces a particle to behave differently due to observation? Is it alleged that these detectors are somehow emitting something which interferes with the photon? Aren’t there detectors out there that don’t emit anything, but merely sit there waiting to detect something? The double slit experiment says that, if I’m watching that photon as its emitted, the act of opening my eyes and observing will force the photon to choose one opening or the other. If I close my eyes, the photon will go through both openings. Is there something, physically, radiating out of my eyeballs that would interfere with the photon?

Sure, we can describe what happens in the double-slit experiment. We have equations describing the wave function. Got it (don’t understand it, but I got it). But what does this wave state of matter really look like? We know what the particle state looks like, it’s all around us. When matter behaves as a wave as it does in the double-slit, what does that state look like? Just has Feynman stated above, it seems impossible that a single particle can pass through two slits. Why is it that we humans can influence that wave state through measurement, and force it to only go through one slit when we’re looking? And, what type of measurement entity will force an electron to behave as a particle rather than a wave? If we could train a monkey to measure the electron, would a monkey’s measurement make the photon collapse into a particle? What about a cat? What about a plant, if plants could see? (Plants can at least sense light, and can sense UV light, which is more than my eyes can do) Shouldn’t there be a physical explanation for this transformation from a wave to a particle?

Edwin Schrodinger created an equation that provides the mathematical representations of this process, but I need something deeper. Most physical processes can be modeled mathematically, but these equations only label and predict a phenomena; they don’t describe what it looks like. Besides the fact that I don’t know what the physical process looks like that makes measurement convert a wave to a particle — why should this even happen at all? There’s no physical reason for matter to behave in two different ways. There’s no logical reason why our decision to measure an electron should fundamentally change that electron’s existence. Here’s better description:

“The observer can decide whether or not to put detectors in the interfering path. That way, by deciding whether or not to determine the path through the two-slit experiment, he can decide which property can become reality. If he chooses not to put the detectors there, then the interference pattern will become reality; if he does put the detectors there, then the beam path will become reality.” Brukner C, Zeilinger A (2002) “Young’s experiment and the finiteness of information” Philosophical Transactions of the Royal Society 360: 1061-1069.

Science is in the business of labeling phenomena and reducing it to equations, much like the ancient Egyptians did with the sun and their sundials. This labeling and mathematical equations have many practical benefits. But mathematical labeling doesn’t always aid one’s understanding of what is happening beneath the surface. Sure, equations can help predict future events like a sundial can predict where the sun will be. (Can evolutionary theory predict anything? Can intelligent design predict anything? Can theories of a multi-verse predict anything?) Rest assured, all this labeling makes some scientists feel intellectually superior to the rest of us without expanding our knowledge. One more quote from Feynman, then we outta here:

“You can know the name of a bird in all the languages of the world, but when you’re finished, you’ll know absolutely nothing whatsoever about the bird… So let’s look at the bird and see what it’s doing – that’s what counts. I learned very early the difference between knowing the name of something and knowing something.”