The Government Cannot Knock on Any Front Door They Choose 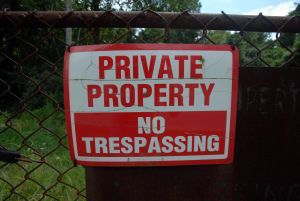 I grew up in a great neighborhood, full of kids who liked to play kickball and soccer. Now, when you combine balls and kids, you end up with broken windows, and having to jump fences to retrieve a stray ball. The problem is, some neighbors were downright nasty. You did not want to go into certain neighbor’s yards. So, those retrieval missions were tension filled, and only the bravest of us would risk retrieval from a grumpy neighbors backyard (basically, someone other than myself). My point here is that, even as a kid, we were able to determine which houses seem inviting, and which houses seemed off limits. And with that preamble, let’s delve into the case of the day.

In Bainter v. State, the defendant was charged with cultivation of cannabis (a grow house, basically). 135 So. 3d 517 (Fla. 5th DCA 2014). Bainter lived on several acres of property, all of which was surrounded by a barbed-wire fence. Did I mention barbed-wire? Would you knock on the front door of a house surrounded by barbed-wire? Anyway, there’s more. The driveway had a chain-link push gate, and a “no trespassing” sign. Supposedly, the police received an anonymous tip that marijuana was being grown in the home. Given the barbed-wire fence, I don’t think this would come as a surprise to anyone that “something” was going on inside this house. Could be kids in there whose pictures are on the sides of milk cartons, could be ten other things–but “something”, right?

In this case, Bainter was the victim of a common police tactic known as a “knock and talk” [see below]. The police did not have a warrant. The police did not have consent to enter the property. So, they knocked on the front door, and eventually seized a bunch of cannabis. As any good defense attorney would do, Bainter’s attorney filed a Motion to Suppress, based upon our Fourth Amendment guarantee “to be secure in [our] persons, houses, papers, and effects, against unreasonable searches and seizures”. (United States Constitution, in case you didn’t know)

The trial judge who heard the motion to suppress denied the motion because the front gate was open, reasoning that, at the time of the government’s entry, “the gate was clearly open”. Bainter, at 519. This judge assumed that an open gate translates into no expectation of privacy, everybody–come on in! What the judge failed to realize is that we American’s have a right to our privacy, and Bainter’s home clearly established that via its “no trespassing”‘ signs, chain linked fencing, and barbed-wire (should be a dead giveaway, right?).

The appeals court overturned the case, holding that the police entry was illegal, reasoning that citizens may establish an expectation of privacy in the curtilage of their home. Id. at 520. The case of Ratcliff v. State explains it like this: “putting up fences, and affirmatively taking express steps to exclude the public or other persons from using the area, seeing into it, or gaining access to the are … are ways to establish such a subjective manifestation.” 783 So. 2d 1099, 1101 (Fla. 5th DCA 2001). So, did Bainter ‘affirmatively take steps to exclude the public from his property’? To you dear readers, the answer is obvious. To the police in this case, the answer was not so obvious.

Other courts have found that police intrusions have violated the Fourth Amendment, even without ‘no trespassing’ signs and barbed wire. The court in Bainter cites Powell v. State, a case involving officers acting like peeping-Toms into a mobile home’s windows late at night, after conveniently receiving–wait for it, wait for it–an anonymous tip. The Powell court found that the officer’s act of standing and looking through the front window constituted an illegal search. Id at 580.

Or, what if you don’t have ‘no trespassing’ signs, but you still have a six foot chain-link fence around the property? Under such facts, a high fence is not enough to ward off the government–you must have signs posted. So, if you don’t want to be bothered by the government, post signs indicating such.

PS – Knock & Talks: the court in Powell lays out a nice definition for a “knock and talk” – a consensual encounter authorizing police to “approach a dwelling on a defined path, knock on the front door, briefly await an answer, and either engage in a consensual encounter with the resident or immediately depart.” Powell v. State, 120 So. 3d 577 (Fla. 1st DCA 2013). Notice the pathway the officers may take? This can be important, because law enforcement cannot run over to the garage door and sniff around, they must take the pathway leading right to the front door. I had a grow house case once in which the warrant was based upon the officers conducting a knock and talk, and smelling weed as they approached the garage. The officers had no right to be near the garage, given the layout of this home’s path to the front door. As such, the evidence was eventually suppressed–case dismissed.