Criminal Defense
Since 1993
Contact Us Now For a Free Consultation
Home
Articles
There’s a Phone in My Face, Is It Legal for Them to Record Me?

There’s a Phone in My Face, Is It Legal for Them to Record Me? 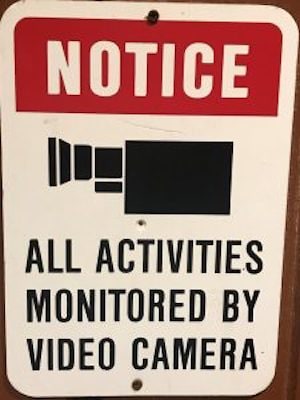 If you’re a rude person, there are all sorts of ways to express yourself.

In a similar vein, if you want to escalate the tension of a situation, there are all sorts of ways to transform the moment into a bigger deal than it really is.

One way to spice things up is to put a phone in somebody’s personal space.

“I’m recording you! What did you just say? Say it again, I dare you.”

As you may recall, video cameras used to be really expensive. Only major news networks had the money to annoy public officials or celebrities with cameras. Now, the potential annoyance has spread to us all.

Welcome to the future.

Sure, we have a Right to Privacy, but technology is creating all sorts of potential privacy violations that were not contemplated by the writers of the Constitution.

I received a call from an old client of mine and she is in the escort business. Her neighbor across the hall from her condo installed a Ring video doorbell.

Well, this doorbell records a video every time there’s a motion at the front door. The neighbor’s doorbell is situated only a couple of feet across from my old client’s front door. As you might expect, when she answers the door for a client–she is not wearing clothing that is suitable for public display. Yet, her neighbor’s Ring captures all of this on video. This neighbor is now threatening to expose his collection of videos which identify a variety of men, who probably would prefer to remain anonymous. Can the neighbor record my old client across the hallway, knowing that these recordings capture glimpses of the interior of her condo?

In more broad terms, is it legal to record someone without their permission?

And, those two words, “it depends”, is how we attorneys make a living. As with any legal question, let’s start with the basics.

Florida’s wiretap law is found in Section 934.03, and makes it illegal to “intentionally intercept . . . any wire, oral, or electronic communication” unless all parties to the communication consent. That being said, the key component to our wiretap law is that the “statute protects only those ‘oral communications’ uttered by a person exhibiting an expectation of privacy under circumstances reasonably justifying such an expectation.” State v. Inciarrano, 473 So. 2d 1272, 1275 (Fla. 1985) (emphasis in original).

Ok. Back to the question, is it legal to record someone without their consent?

It depends on whether (1) you are exhibiting an expectation of privacy and (2) whether the circumstances reasonably justify that expectation.

Are you with me so far?

With those two factors in mind, let’s take a look at the recent case of Smiley v. State, 2019 Fla.App. LEXIS 12628 (Fla. 1st DCA 2019). Smiley was convicted of aggravated assault with a deadly weapon and battery domestic violence. The mother of his child invited him over to her house. They got into an argument, and she told him to leave her house nine times. During the course of this argument, she used her cell-phone to record the argument. Smiley objected to the recording and attempted to take the phone from her.

Naturally, Smiley’s defense attorney didn’t want the jury to see this recording, so a Motion to Suppress was filed (basically, a “motion” asks the judge to do something, and “suppress” is a fancy way of saying ‘don’t let anyone see this evidence, it was obtained illegally’).

The judge denied the motion and the jury was permitted to see the video. The jury convicted. On appeal, Smiley asserted that the video should have been excluded under Florida’s wiretap law because Smiley had a “reasonable expectation of privacy in statements he made as a guest in the victim’s home”. id at 2.

Well, not so fast. Florida’s wiretap law has a few loopholes. Again, we attorneys make a living on loopholes, and this one was exploited by the prosecutor. The question in this case was, did Smiley have an expectation of privacy under the circumstances?

The appellate court denied Smiley’s appeal, ruling that it was ok to let the jury see the video, even without Smiley’s consent. Here’s why.

The appellate court’s first rational was their weakest. They found that Smiley’s expectation of privacy was not reasonable, because Smiley acknowledged that his then-girlfriend was holding a phone in his face. He even tried to take the phone from her, so he certainly knew it was there. The court stated that “because the facts support a finding that Smiley knew he was being recorded, Smiley failed to show that he had a subjective expectation that his statements were ‘not subject to interception.” id. at 5. (emphasis added)

The court seems to be saying that, no matter where you are (in this case a home that you’ve invited to), if a camera is held in front of you, that act shatters your expectation of privacy because ‘you know you’re being recorded.’

Let’s carry their logic a bit further. Assume you’re out and about, needing to use a public restroom. In the restroom, someone comes up to the crack in the stall door and points a video camera at you with your pants at your ankles. You tell this person to stop recording. Under the appellate court’s logic, this recording doesn’t violate the wiretap law because you know you’re being recorded (Yes, this person would be guilty of felony video voyeurism, but under the court’s logic there would be no violation of the wiretap law).

Even though the court’s first reason for permitting the jury to see this video is a bit shaky, their second reason makes more sense. Smiley was told by the homeowner to leave nine times. Even though Smiley was never, legally, labeled a trespasser, the court found that because “the victim demanded that Smiley get out of her house no less than nine times . . . Smiley’s expectation of privacy, if any, was no longer reasonable or justified.” id. at 6. As a general rule, trespassers do not have a reasonable expectation of privacy. Thus, if you break into someone’s home and discover later that everything you did in that house was captured on video–tough luck.

I’m a bit troubled by this case, because it is awefully close to finding that, just because you know your right to privacy is being violated–is it now your obligation to shut up?

That doesn’t sound like the purpose of the wiretap law. Florida’s wiretap law is in place to ensure that we citizens have an expectation of privacy. Do we lose this privacy every time someone holds up a phone? Shouldn’t the law protect that privacy, even when someone violates that right by putting a phone in your face?

SIDEBAR, FOR ATTORNEYS ONLY (too boring for general consumption):