Criminal Defense
Since 1993
Contact Us Now For a Free Consultation
Home
Articles
Today, Garden of Eden Would Be Illegal

Today, Garden of Eden Would Be Illegal 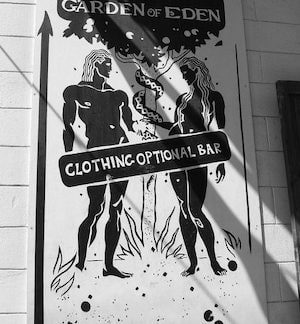 A quick reading of the Book of Genesis gives a glimpse of the first environmentalist, noting that God put man “in the garden of Eden to tend and keep it.” Gen 2:15. A few sentences later, the Bible describes Adam and Eve, noting that “they were both naked, the man and his wife, and were not ashamed.” Gen 2:25.

There are several places in Florida in which folks are both naked, and not ashamed. The question for the day is, when is it legal to be naked–and when is it not? Here’s a few examples of what’s ok, and what isn’t. In State of Florida v. Silvers and Hall, 7 Fla. L. Weekly Supp. 592c, the Broward Sheriff’s Office conducted an undercover operation in which Silvers and Hall were arrested for soliciting a lewd act, and lewdness, at a local swinger’s club called “Trapeze”. The cops were actually looking for prostitution, but couldn’t find it in a swinger’s club (duh!) Trapeze is a private social club that charges a membership fee. Most members are naked within the club, and performing sexual acts right there, for everyone to see (inside the club, that is). Signs are posted warning of nudity and sexual activity. Several police officers volunteered for this undercover operation. As part of this “operation”, some officers got naked in a hot tub full of other naked–all to make Ft. Lauderdale a safer place, of course. No word on exactly how many officers “volunteered” for this very important misdemeanor investigation, but I’m sure Broward County residents would be pleased to know that their hard earned tax dollars have supported many naked hot tub parties. Sure, this investigation removed numerous officers from the streets fighting violent crime, and moved them into naked hot, all in the name of a few misdemeanor arrests for lewdness. Well worth the thousands of taxpayer dollars spent, right?

At some point, after the undercover naked officers had had enough hot tub fun, they decided to make an arrest. The police storm into this private club, and arrest these naked swingers for lewdness. This is America, right? This isn’t Iran, right? So why is it that these officers ignored the very “definition” of lewdness? Basically, lewdness has one big requirement: it must offend someone. A lewd act requires “an intentional act of sexual indulgence or public indecency, when such act causes offense to one or more persons viewing it or otherwise intrudes upon the rights of others”. Id. citing Schmitt v. State, 590 So. 2d 404 (Fla. 1991). The problem is, under most circumstances, you cannot–legally–offend a cop. The Silvers’ court reasons that, in a lewdness case, “the protected class is unsuspecting members of the public. This law is designed to protect the public from being exposed to unwanted sexual acts.” Id. Just like cases of disorderly conduct, a crime that also requires the “public at large” to be offended by the conduct, our courts have held that a police officer is not a member of the public at large, “and therefore not part of the protected class.” Id. Much of the analysis pertaining to lewdness can be applied to disorderly conduct cases, but disorderly cases rely heavily upon someone other than an officer being offended, and lewdness cases that occur in public places negate the “offending a citizen” requirement.

The court also cites Haines v. State of Oklahoma, 512 P. 2d 820 (1973), in which Haines was a nude dancer performing at a night club, probably trying to dance her way thru college. The audience paid to attend, and the room was completely shielded from public viewing. The court reasoned that “no one in the audience was offended or annoyed by the performance with the exception of the police officers.” Id. The court struck down the conviction, noting that, even though the cop was offended, the “testimony of a police officer, a veteran of the Oklahoma City vice squad, is not sufficient, under these circumstances, to meet the State’s burden of proof.” Id. at 822.

So, can a cop ever be “offended” for purposes of a lewdness charge? Yes, but the answer revolves around three things: Location, Location, Location. In State v. Kees, 919 So. 2d 504 (Fla. 5th DCA 2005), Seminole County’s Sheriff’s Office utilized hard earned tax payer dollars to investigate the Red Horse Saloon (undercover operation, of course, tax payers footed the bar tab, again…). Once inside the Red Horse, the officers observed “women exposing their breast and men kissing them, men inserting their fingers into women’s exposed vaginas, and a man lifting the skirt of a woman and performing cunnilingus on her”. Id. Once again, I doubt anyone at the Red Horse Saloon was offended by this, but, of course, the officers were offended. But offending folks is not necessarily a requirement if the activity is in a public place. In other words, if you’re having a naked orgy in a middle school gymnasium and a cop walks in, the cops don’t have to wait for the children to arrive before making an arrest–the fact that the activity is happening in a public place is all that’s required. And Kees hinged on just such an argument. Unlike the Trapeze case, the Red Horse Saloon was, essentially, open to the public, and lewd acts in a public place “inherently intrude upon the rights of others…and therefore, is criminal.” Id. at 506 [internal citations omitted]. The Schmitt case noted that, “for example, deliberately exhibiting one’s nude body to passers-by in a shopping mall would be ‘lewd’ and ‘lascivious’. Being stripped naked against one’s will in the same location is neither ‘lewd’ nor ‘lascivious’ because it is not intentional.” Schmitt at 410.

The requirement that someone be offended by nudity “was added by the courts only in circumstances when the charge of lewdness was being applied to conduct occurring in private places.” Kees at 506. An example from U.S. Supreme Court Justice Anthony Scalia reasons that “the purpose of Indiana’s nudity law would be violated, I think, if 60,000 fully consenting adults crowded into the Hoosier Dome to display their genitals to one another, even if there was not an offended innocent in the crowd.” Barnes v. Glen Theatre, Inc., 501 U.S. 560 (1991).