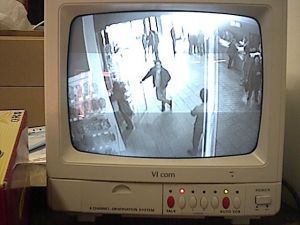 Retail theft just isn’t what it used to be. Back in the day of smaller retail stores, thieves were forced to get creative with their attempts to leave a store with merchandise. Ever seen the Jane’s Addiction video for “Been Caught Stealin’“? Or, how about Mike D, MCA, and Ad-Rock’s thievery discussion in the Beastie Boy’s classic “She’s Crafty?” That’s what I’m talking about–but those days are over. Today, there’s no suspicious shop owner watching over the goods. No owner on premises. Today, the stores are far bigger than in the past, and thus easier to rip off. Did we have Super Wal-Mart’s fifty years ago? I think not. So, thieves have gotten lazy.

This lack of criminal creativity is reflected by the fact that, now, one of the most common retail theft schemes involves folks merely walking out of a large box store without paying for the goods in their cart. Sure, stealing is wrong, but this new way of stealing is even worse, as it lacks all sense of style and creativity. Our question for the day is, at what point is a citizen guilty of a crime? Obviously, when a shopper puts something in his shopping cart–at that point–there’s no theft. Now, as the shopper approaches the exit doors–and passes all the registers–we’re getting closer to theft, right? What about exiting the store with a cart full of goods you simply forgot to pay for, are we there yet? Let’s find out.

Our real life case for today is McClover v. State, 2013 Fla. App. LEXIS 7870 (Fla. 4th DCA 2013). McClover was convicted of felony retail theft (shoplifting goods valued at over $300.00). A felony retail theft is different from a simple felony grand theft charge, and we’ll touch upon that later. As for the facts in McClover’s case, the situation began with a Wal-Mart loss prevention officer using his video surveillance cameras to follow McClover putting items in her cart from the electronics department, and then proceeding out to garden center exit–without paying, of course. The problem was, the garden center didn’t have a cash register open at that time, the exit was closed, so McClover simply left the cart full of electronics within the garden center, and left the store via the main exit.

Wal-Mart’s loss prevention thought this behavior was suspicious, so they called the police. Their surveillance followed McClover out to her car, and the police eventually stopped the car. Can you guess what the police found in the car? Yep, a bunch of Wal-Mart merchandise from another Wal-Mart. Now, I would question how one can tell which store the merchandise came from, as most of these goods are simply marked “Made in China”. Anyway, the problem with video surveillance is that, the store can often save this footage for viewing on another day. And, that’s just what happened here. The goods inside the vehicle were traced back to another Wal-Mart store, so that Wal-Mart store reviewed their surveillance footage, and guess what they discovered? Yes, you can be charged with shoplifting or petit theft if they discover such later on, after reviewing the tapes. In this case, they didn’t charge McClover.

McClover took her attempted shoplifting from the garden center to a jury trial and lost. She received a sentence of 48 months in prison. The issue on the appeal was simple: McClover’s defense attorney requested that the jury be instructed on a theft concept known as “abandonment”. It’s a simple concept, really, and the defense attorney wanted a jury instruction stating that “it is not an attempt to . . . commit the crime charged if the defendant abandoned her attempt to commit the offense or otherwise prevented its commission under circumstances indicating a complete and voluntary renunciation of her criminal purpose.” Id. But, the state complained, and asked the judge not to read this instruction. The judge agreed with the state, reasoning that such an instruction required that McClover “admit an attempt to take the goods, which itself was a crime because the theft statute covered an endeavor to take goods of another. Therefore the court found that the instruction was unwarranted.”

Yes, McClover’s conviction was reversed, and sent back to the trial court for another trial. Why? Well, this is an issue that keeps coming up–defendants are always entitled to a jury instruction on their theory of defense, “if there is any evidence to support is theory”. See that word “any”? Yep, “any” means just what it says. And yet, many judges don’t understand that word, so they end up requiring the defendant to present far more evidence of their theory than is required by law to get a jury instruction. Also, the appeals court notes an important distinction between grand theft and retail theft, because retail theft includes the following activities:

“taking possession of or carrying away of merchandise, property, money, or negotiable documents; altering or removing a label, universal product code, or price tag; transferring merchandise from one container to another; or removing a shopping cart, with intent to deprive the merchant of possession, use benefit, or full retail value.” Florida Statute Section 812.015(1)(d).

The appeals court correctly reasoned that McClover “did not leave the store with any unpaid merchandise”, she “did not conceal the merchandise”, and thus a “jury could also find that she abandoned her attempt when she and her companion left the goods in the store.” Id. Many times, a court’s rejection of a defense jury instruction will lead to a successful appeal. I wrote about another such jury instruction problem in a theft case entitled “Good Faith Can Defeat a Grand Theft Charge“. Check it out for more info. There’s a string of cases out there that “should” warn judges and prosecutors that defendants are entitled to a jury instruction when they can present any evidence of such.

So there you have it. A sneak peek at how the charge of “retail theft” can differ from a charge of “grand theft”. The court focused on the statute above, finding that McClover’s conduct never violated anything under 812.015(1)(d), and the denial of a jury instruction. This is a good lesson for everyone out there, focus on the statute alleged. Read it, it won’t hurt you.