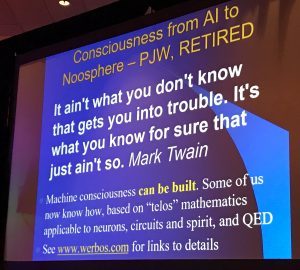 My DVR at home is packed full of science shows, physics and cosmology in particular.

Science shows have a predictable format: “Interview a few geniuses who have it all figured out. Theory XYZ explains that the universe started like this, or gravity works like that, or subatomic particles behave like this, or humans evolved like that.”

Does science really have it all figured out? Here are some gentle reminders that geniuses are not as smart as we think they are:

“There is not the slightest indication that nuclear energy will ever be obtainable.” – Albert Einstein, 1932

“I think there is a world market for maybe five computers” – Thomas Watson, IBM Chairman, 1943

“... my imagination refuses to see any sort of submarine doing anything but suffocating its crew and floundering at sea.” – HG Wells, 1901

[all of the above, plus the picture, were taken from an excellent lecture by Paul Werbos at the 2018 Science of Consciousness Conference, put on by the Medical School at the University of Arizona]

Maybe we don’t know everything, but are there any major revolutions left for scientists to uncover?

Scientific American author John Horgan wrote an excellent book called “The End of Science“, claiming that we’ve had all the great scientific revolutions we’re going to have. Science egos have a hard time swallowing Horgan’s position, and he rubs salt into the wound by explaining that science will never solve the really important questions, like “Where did the universe come from? How did life begin? How, exactly, does a chuck of meat make a mind?”

With no scientific revolutions remaining, our genius scientists seem doomed to diminishing returns. Science is now forced to simply drill deeper and deeper into concepts which have less and less impact on our lives. Another book, “But What If We’re Wrong“, ponders what these diminishing returns might look like:

“If we realized something profound and insane about atomic structure, happening on a level so microscopic that it could never be touched or observed or manipulated, the only thing it would really change is the language of textbooks. Here again, the (very real) paradigm shift would feel like nothing at all. It would mirror the reaction of a seventeenth-century shepherd who had just been told we live in a heliocentric universe: “Oh. (Chuck Klosterman, But What If We’re Wrong, p. 120)

If you’ve made it this far, you’re probably wondering how I’m going to transition from scientific knowledge to criminal defense.

Well, I must tell you. I’ve been going to the University of Arizona medical school’s conference on the Science of Consciousness for years, and my accountant won’t let me deduct the trip because its not related to my work. I beg to differ. I just showed you a slide from the conference, I quoted some stuff from the conference–isn’t that enough?

Also, not only is my accountant breathing down my neck, but my web people (Justia) insist that I talk about the law at some point. After all, how can they optimize my criminal defense site if I’m always wandering off into the weeds?

Believe it or not, our Constitution places limits on the police’s involvement in our lives, and much of these limits rest upon police knowledge or lack thereof.

A recent real life case lays out all the details of how much the police must know before they can stop you.

Yes, there’s a thousand rap songs describing just this sort of thing, and its actually happening. A confidential informant inside the club noticed that Slydell had not one gun, not two guns, but three guns–which the informant noticed that he stored his gym shorts.

What gym shorts can contain three guns? The weight of three guns would cause problems, right?

Anyway, the confidential informant gives the police a description of Slydell. Slydell leaves the club and as he’s walking down the sidewalk — the officers spot him. They order Slydell to the ground at gun point, and notice that “a heavy object was weighing down Slydell’s shorts pocket.”

Remember our discussion about knowledge. Is it important to know that Slydell has three guns on him?

As Slydell was going to the ground, the cops could see the barrel of a gun in his pocket. They arrest him, and find two semiautomatic handguns and one revolver.

Slydell’s defense attorney filed a Motion to Suppress because there was no legal reason to stop Slydell. For those of you unfamiliar with motions to suppress, this is just our way of telling the court that they should throw out evidence (guns, in this case) because the police have failed to follow the law (is it legal to stop someone at gunpoint for having guns in their gym shorts?).

What should the police know before stopping a person at gunpoint?

Basically, there must be some knowledge that Slydell committed a crime. After all, it is legal to carry a concealed firearm in Florida (with a permit, of course).

Slydell’s Motion to Suppress was denied. The trial court found the police action in this case perfectly legal. He was convicted of carrying a concealed firearm and possession of a firearm by a convicted felon. The appeals court didn’t like what they saw, so the higher court threw out the convictions.

The police simply didn’t know enough to justify their sidewalk stop at gunpoint.

The court reasoned that “[no] matter how reliable the confidential informant or how detailed the description of Slydell and the guns, the tip did not allege any criminal activity, and in particular it did not reveal Slydell’s status as a felon nor did it say whether he had a concealed weapons permit. Upon encountering Slydell, the officers saw a bulge in Slydell’s shorts pocket and presumed it was a gun based on the information give to them, but they did not observe any conduct that would constitute a crime or impending crime, they did not know he was a felon, and the did not ask Slydell any questions before ordering him to the ground. Whether Slydell had a concealed weapons permit was ‘a fact that an officer cannot glean by mere observation.’ ” id. at 4.

And there you have it. The police knew Slydell had guns, but this knowledge wasn’t enough. What they needed to know was alluded to by the appeals court — does this man have a concealed weapons permit? Is this man a felon?