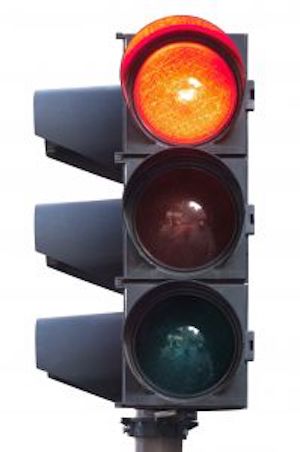 Usually, this blog has but a few topics–criminal law, physics, or philosophy. But today, we’re delving into Florida’s Equal Protection Clause–as it relates to running a red light. To figure out what’s wrong with the red light camera laws, we have to dig deep into an insightful opinion from back in 2008, regarding toll violation citations.

First, let’s address a recent (2012) red light camera case. Imagine you run a red light and get caught. The problem becomes, how you get caught determines your punishment. Basically, you are punished more severely for being caught by a police officer than a red light camera. The fines for running a red light via camera are significantly less than the fines imposed when caught by a cop doing the same thing. Recently, a trial court held that the statutes dealing with running a red light violate both federal and state Equal Protection Clauses because the red light camera statute (Florida Statute 316.0083) punishes the exact same conduct as the citation written by a police officer (Florida Statute 316.075), yet “a driver who is observed by an officer committing the violation (in the traditional manner) is subjected to more severe penalties and ramifications than a driver who is fortunate enough to have committed the infraction at a “red light camera” intersection.” State v. Arrington, 95 So.3d 324 (Fla. 4th DCA 2012).

The State appealed the judge’s decision in Arrington, and the Fourth DCA agreed with the State, finding that the statutes do not, in fact, violate the Equal Protection Clause because the red light camera citation is only punishing the owner of the vehicle without assessing points against a driver’s license. By contrast, a citation written by a police officer is not against the “owner” of the car, it is against the “driver”. As such, the “driver” may be assessed points. Thus, the court found both statutes constitutional because they punish different things.

The appeals court cited the State’s argument that “points are personal–they apply to the licenses of people [who] violate traffic laws; they are not assessed against the vehicles involved in the violations. Due to section 316.0083’s focus on a vehicle’s “owner”, rather than the actual “driver”, it was rational for the legislature to exclude the imposition of additional points on the owner’s license.” Id.

My problem with the Arrington decision is that it ignored the real problem with the red light camera statute. To best understand this problem, we have to take a look at the well written, prophetic opinion issued by Seminole County Judge John Galluzzo in the Baird case. In Baird, most Seminole County toll violation tickets were thrown out of court–for many reasons–one of which was the fact that toll violators should not suffer points on their license because the toll authorities are not required to prove who is driving. Baird v. Department of Transportation, 08-32 AP (Seminole County, Circuit Court, April 2008).

As is often the case, good judges can get it right years before the rest of the court system figures it out. When you read Galluzzo’s opinion regarding the problems with points being assessed to a driver based upon automated toll violations, this rational applies to the red light camera statute as well, as red light camera citations eventually transform into points against a driver’s record (if not paid in time) without ever requiring proof as to who was driving when the red light was run.

In Baird, Judge Galluzzo addressed the “owner vs. driver vs. points” problem years before anyone else. Galluzzo warned us that the toll statute “attempts to impermissibly shift the burden to the owner of a vehicle to prove they were not the driver (F.S. 316.1001 (2) (c) (2007)). It does not however exempt the FDOT from having to prove that the person cited for a noncriminal moving violation was in fact the person operating the vehicle. To allow the FDOT to assess points against the driving record of the first named owner of a vehicle when a citation is issued for a moving violation without having to prove that person was the driver of the vehicle, i.e. in control of the vehicle when the toll violation is alleged to have occurred, would be a denial of that person’s right of due process, which cannot be abridged by an impermissible shifting of the burden of proof.”

Basically, Judge Galluzzo found an issue in the Baird case that the Arrington court missed–improper burden shifting. I can admit that the Arrington court probably decided their issue correctly, but they missed the fact that the red light camera law violates due process by shifting the burden of proof to the owner of the vehicle to prove who was driving, in the same way as the toll statute. As such, the red light camera laws should be struck down as a violation of due process, as the statute forces a car owner to prove who was driving their car at the time it ran a red light. Just my opinion, of course.