What to Do When the Police Want to “Talk” to You 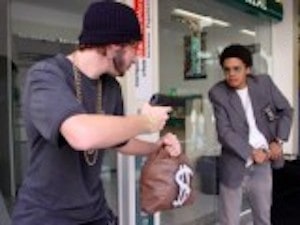 Think back to middle school or high school for a moment.

Remember that sinking feeling when you’d get called to the principal’s office? Even the vice-principals office would give you that same feeling, right?

Ok, so this only happened to me.

If school administration never needed to pull you out of class, good for you, but I’m sure you’ve had other “uncomfortable talks.” How about those times when your significant other mentions five vague words like: “Honey, we need to talk.” Hum, what could that be about? I’ve done nothing wrong.

A serious talk with a doctor can change your whole outlook on life. As I sit here typing this on a Monday afternoon, my week doesn’t seem that valuable. Yes, I take things for granted I suppose. But, my tune would change if a doctor told me that I only have another week to live. How much would I pay just to have another day? Just to have another week? Every day would be priceless at that point. (some folks visualize the worst possible thing every morning, wife and kids dying, what-have-you, in order to set up gratitude to last the rest of the day. I can’t stomach that.)

Talking with the police can land you in a similar spot. Say the wrong thing, and you may be spending the rest of your life behind bars. Fortunately for some, DNA testing has set free hundreds of people who have spent decades in prison–and these folks had confessed to their crime.

Yes, detectives are professional interrogators. Just like a magician can make things disappear, detectives can make people say things that aren’t true. False confessions occur for any number of reasons, and the phenomenon is scary. But there is something you can do.

Don’t say anything to the police. We all know what happens to fish who open their mouth, same thing for people.

Our case for today involves a confession, and what happens when the police say things during a confession that gets folks to talk.

Here’s what happened: a couple of years ago, a young lady was passing out CD’s in a parking lot at night. No, this case is not from 1998. I had to do a double take just to make sure this was a recent case. Anyway, you’ve got to be a bit down on your luck if the only way you can make money is to pass out CD’s in a parking lot. After all, no one plays CD’s anymore. Unfortunately, things only got worse from there.

Robbery isn’t the half of it here. Rodney Squire is accused of shooting this young lady in the head after attempting to rob her. He is also charged with shooting a second person. Squire v. State, 193 So. 3d 105 (Fla. 4th DCA 2016)

Forget about the moral implications of shooting someone in the head. Set that aside, if you can. If you need money, are you stalking some woman who is passing out CD’s in a parking lot and thinking to yourself “Yea, that gal has tons of money–my ship has come in”. It should be obvious that this woman is down on her luck. No one is passing out flyers and CD’s and driving off in their Bentley.

If you can get past the main question–why rob this person, you’re still left with a bigger question. Why shoot them in the head? Insane. I’m thinking Squire’s defense attorney should have filed for an insanity “at the time of the offense” defense because no one in their right mind would do this. (Spoiler: the defense attorney and prosecutor stipulated that Squire is “mentally retarded”. Their words, not mine. As Paul Harvey would say, ‘And now you know the rest of the story’).

So, CD’s are dropping to the ground. Blood is gushing from this woman’s head, and she shouts to someone to call 911. She’s screaming, holding her head (obviously), saying “I got shot, I got shot.” When the 911 caller asks who shot her, she says “J.R.”.

The police know a “J.R.” The police find J.R. nearby. His real name is Rodney Squire. The police chatted with Rodney, and explained that they “wanted to give him a chance to truthfully tell his side of the incident.” Squire denied shooting anyone, and then the police double-speak began:

Detective: “listen, what’s a better charge here, a robbery attempt, where nothing was even taken, or two attempted murders. I want you to think about that for a minute . . . ’cause if you tell me the truth, that that was accidental, which is what I think it was, that’s a big difference than you trying to hit her.”

“Now, you got to think about an attempted robbery or two attempted murders. Which one do you want to face?”

Rodney: I can beat an attempted murder charge, go ahead and charge me.

[SCENE 2: Cop leaves room, let’s Rodney make a call, and cops listens in. This happens every time, So I don’t know why anyone talks at this point]

Rodney calls Grandma: I didn’t do it, I’m innocent!

Rodney: You sure this would be a lesser charge if I talk?

Detective: Rodney, you ready to tell the truth?

On appeal, Squire explained that his confession was involuntary because the detective assured him that he wouldn’t be charged with attempted murder. The higher court agreed, finding that “the detective’s comments created an implied promise of leniency and an agreement to lessen the charges in return for cooperation. Therefore, the confession was induced by impermissible conduct.” id. at 108. The court was not happy with the fact that the detective misled Squire, claiming that he “was trying to figure out whether the shooting was an accident or intentional, so as to determine the proper charge” and that Squire’s confession “was the result of the detective’s promise to lessen the charges if appellant told the truth. As such, it was the product of coercive police conduct and must be suppressed.” id at 109.

Yes, Rodney’s 25-year prison sentence was overturned. After many years in prison, Rodney was a free man. Shawshank, as they say.

Now, just because he won his appeal doesn’t mean the case was finished. The case was placed back on the court’s trial docket, and this time Rodney received a much better sentence. He pled to 6 years of supervised probation in July of 2016. But that’s not the end of the story.

While out on probation, Rodney was charged with (another) Aggravated Battery. In Janauary of 2017, the judge gave Rodney 20 years prison on his VOP. Yes, you heard me. Six years of probation inflated into 20 years of prison.