Criminal Defense
Since 1993
Contact Us Now For a Free Consultation
Home
Articles
What’s the Difference Between a “Weapon” and a “Deadly Weapon?”

What’s the Difference Between a “Weapon” and a “Deadly Weapon?” 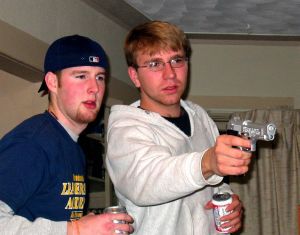 Yes, there are probably more important questions in life other than the definition of a deadly weapon, right? But, because we have devoted this space in the Universe to a public discourse on the inner-workings of Florida’s criminal justice system, the answer to this question will shed some light on the kinds of proof required of our government in order to convict a citizen of crimes using “deadly” weapons. Seems like just about anything can be considered “deadly” these days.

When no one is injured, how do you prove something is “deadly”? Some objects, such as “firearms”, are automatically–by definition within Florida’s statutes–considered deadly. But, there’s a whole bunch of stuff out there that has yet to be defined by our legislature. One such item is a BB gun.

Today’s analysis begins with the recent case of M.J. v. State, 100 So.3d 1286 (Fla. 4th DCA 2012). M.J. was convicted of a misdemeanor “exhibiting a firearm or other deadly weapon in a rude, careless, angry or threatening manner”. The fact is, M.J. admits that he had a BB gun, and he concedes that he exhibited the BB gun in a threatening manner. Now, that ought to be a crime, right? Well, it can be, depending upon the evidence presented by the state.

The lesson here: read the charging documents carefully and make the prosecutor PROVE every element. Here, we admit M.J. was rude. We admit M.J. was threatening. We admit M.J. was all of this with a “weapon”. But, a close reading of the charge reveals that M.J. can only be found guilty if the weapon he exhibited was (1) a firearm, or (2) a deadly weapon.

So, a BB gun is not a firearm, that is well established. But, is a BB gun a “deadly weapon?” In other words, the law permits you to exhibit an ordinary “weapon” in a threatening, angry, and rude manner. In Texas, that sort of behavior will get you shot. Not so in Florida. Under Florida Statute 790.10, you can exhibit “a weapon” in a threatening manner, but it’s a crime to exhibit a “deadly” weapon in such a manner. You see where this is going? Our final question of the day…is a BB gun a “deadly” weapon?

According to Florida law, a “deadly weapon” is “one likely to produce death or great bodily injury.” Id. at 1287. Can a BB gun produce death or great bodily injury? Well, that depends upon the evidence presented by the state. In the case of K.C. v. State, 49 So.3d 841 (Fla. 4th DCA 2010), the state admitted a BB gun into evidence, but the conviction was reversed because the state failed “to present any testimony about its use or the potential injury it could cause”. Id. By the same token, M.J.’s conviction was overturned, with the appeals court reasoning that “no witness testified about how the BB gun fired by [M.J.] might qualify as a ‘deadly weapon’. [M.J.]’s motion to dismiss the charge against him should have been granted because the State failed to prove that the BB gun was a ‘deadly weapon’.” Id. If I had a dollar for every time an appeals court said a that a “motion to dismiss should have been granted”….

You’re going to find a “deadly weapon” analysis in all sorts of cases, as a deadly weapon enhances a misdemeanor assault charge into a felony aggravated assault. It also upgrades a misdemeanor battery charge into an aggravated battery with a deadly weapon. Same goes for the charge of throwing a deadly missile. So, when this analysis creeps up, just remember that proving something is “likely to produce death or great bodily harm” is not has easy as it seems. In one case, a court found a grapefruit to be deadly because it was thrown off a bridge onto a passing truck, and the windshield shrapnel injured the truck driver. (Wilton v. State, 455 So.2d 1142 (Fla. 2nd DCA 1984))