Criminal Defense
Since 1993
Contact Us Now For a Free Consultation
Home
Articles
Who Are You? 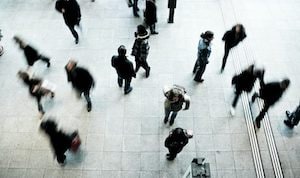 [Yes, I’ve mentioned this bit of history before, but you love it so much it bears repeating]

Two thousand years ago, there was a great Rabbi named Akiva. Akiva was heading home late one night, when the darkness and fog caused him to make a wrong turn. Rabbi Akiva ends up at this massive Roman outpost. As Akiva approaches, he hears a wrestling on top of the wall, and a soldier yells down “who are you, and what are you doing here?

The guard yells, again, “Who are you? What are you doing here?”

Akiva pauses, and then asks: “How much are they paying you?”

The guard says “What?”

Akiva repeats, “How much are they paying you?”

Akiva says: “I’ll pay you twice that to come to my house every morning and ask me those two questions.”

[This tidbit is from Rob Bell’s podcast, which can be found here, Robcast episode #128, and I wrote about this seven months ago in another article]

We do have to ask ourselves from time to time, who we are, and what the heck we’re doing on earth. After all, when I woke up this morning I’m pretty sure I didn’t “deserve” another day on earth. It happened, and I’m grateful for it–but there are plenty of people out there that didn’t make it through the night. Why did I get another day, and they didn’t? Most mornings I simply pop out of bed, a victim of my alarm clock and tight schedule–without appreciating the fact that I’ve been given another (undeserved) day on earth.

Roger Hodgson of the band Supertramp said it best their classic The Logical Song:

There are times when all the world’s asleep
The questions run too deep
for such a simple man
Won’t you please, please tell me what we’ve learned
I know it sounds absurd
But please tell me who I am?

You are not your biography.

Now, try telling that to a sex offender. The concept that they are and will always be a sex offender is drummed into their head from every direction. Its sad, really. And, its not true.

For legal purposes, a sex offender designation triggers a lifetime of obligations that other crimes do not. For example, if you’ve beaten your wife ten times (it happens, unfortunately), there are no registration requirements. Sure, you wife’s family hates you. Your wife probably hates herself for taking you back nine times. Still, no registration requirements. If you’ve been convicted of murder–you’re not required to be on the “Florida Murder Registry,” because there is no such thing. We don’t have a “convicted murderer task force” tracking the movement of folks who have already served their sentence for murder.

In the case of Clay v. State, a jury found Clay guilty of failing to register as a sex offender, and he was sentenced to 63.75 months in prison (yes, the maximum is five years, but a “longer than the maximum” sentence is permitted in this case for reasons that would bore you). 2017 Fla. App. LEXIS 12568 (Fla. 5th DCA 2017)

Technically, Clay was charged with “Failure of sexual offender to report to sheriff’s office during birth month and during the third month after the birth month“, in violation of Florida Statutes 943.0435(14)(b). This charge is somewhat different than simply failing to ever register. Clay was a registered sex offender, and was in compliance for many years. But to send Clay to prison for not complying, the state must prove three things, “(1) status as a sexual offender; (2) offender’s county of residence; and (3) knowing failure to register.” Id.

This case went up on appeal, and Clay’s defense attorney complained after the jury verdict that the state never proved Clay was required to register as a sex offender because these registration requirements only kick in for folks either convicted or still serving their sentence after October 1, 1997. Clay was sentenced on a sexual offense on October 30, 1995 to ten years prison. So if you do the math, Clay’s sentence would have extended past the October 1997 line by several years, right?

The appeals court noted that “the State offered no direct evidence to do so, providing neither a witness nor documentation from the Department of Corrections to meet its burden. Instead, the State relied solely on an inference that, because Clay was given a ten-year sentence on October 30, 1995, he must have been released from incarceration after October 1, 1997. . . We disagree. The State has the burden to prove each element of the offense charged beyond a reasonable doubt. That cannot be accomplished based upon guesswork. A number of factors impact the amount of time an inmate serves on any given sentence, and that information is not presented to the jury for determination of an inmate’s release date.” Id.