Criminal Defense
Since 1993
Contact Us Now For a Free Consultation
Home
Articles
Who Gets to Watch a Public Jury Trial?

Who Gets to Watch a Public Jury Trial? 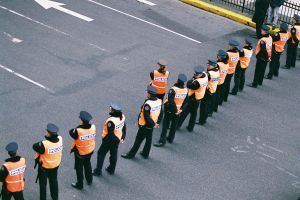 Jury trials are an important part of our legal system. The courtrooms in which these lawsuits play out rarely have an audience. Maybe a few family members at most. But today, we’re not going to discuss how 99% of jury trials are conducted, we’re going to discuss those rare cases in which the courtroom is filled to capacity. Imagine a capacity crowd, but not filled with “citizens” per se, but rather uniformed police officers. You think a defendant can get a fair trial under those conditions?

Our case of the day involves the murder of a police officer, with a packed courtroom of officers showing their support for a fallen comrade. Nothing wrong with that, right? It’s a free country, courtrooms and jury trials are open to the public. And, this isn’t China, so anyone should be able to watch a trial dressed any way they choose, right? Well, sometimes the audience may only serve to hinder an accused’s right to a fair trial. Let’s see how this works.

In Ward v. State of Florida, 105 So.3d 3 (Fla. 2nd DCA 2012), Ward was convicted of second-degree felony murder, resisting an officer with violence, resisting an officer without violence, and two counts of battery on a law enforcement officer. After these convictions, Ward filed a motion claiming that his defense attorney was ineffective at trial because he failed to object to the overbearing presence of numerous uniformed police officers in the audience during his trial. It was his claim that he was denied a right to a fair trial, and his defense attorney should have called this to the judge’s attention.

Doesn’t this seem a bit un-American? How can we deny law enforcement their right to be present for a public trial, dressed any way they want? Wouldn’t firefighters do the same thing? Wouldn’t Catholic priests do the same thing? Well, the courts recognize that our juries are not perfect human beings, capable of ignoring outside influences. There have been several Florida cases which have held that the “presence of uniformed officers in the audience may constitute denial of the right to a fair trial if it resulted in actual or inherent prejudice to the defendant”. Id. Ok, how do you prove ‘actual or inherent’ prejudice?

To understand how a defendant proves that an audience prejudiced a jury, we must look to the case of Shootes v. State. The case held that prejudice can be shown thru testimony “by a juror or jurors that they were conscious of some prejudicial effect.” 20 So.3d 434, 438 (Fla. 1st DCA 2009) Shootes also discusses a second way of showing how numerous police officers in uniform may trigger the denial of a fair trial, and they call this an “unacceptable risk of impermissible factors”. Id at 439. Hum. What the heck does that mean? Seems like the courts, sometimes, just kick the can down the road a bit using more words that they refuse to define. Eventually, the court explains that “[w]here a substantial number of uniformed or otherwise identifiably garbed officers are not present for the purpose of preserving order in the courtroom or to provide testimony in the proceedings, a jury is susceptible to the impression that the officers are there ‘to communicate a message to the jury.’” Id. Indeed, most courtroom crowds supporting either a victim or defendant may be present to communicate a message to the jury, but that message may merely be one of “support”.

In the end, the appeals court granted Ward an evidentiary hearing before his original court to determine if the trial record either supports Ward’s claims, or refutes them. That being said, this appeals court found that–assuming the courtroom really did “look like a policeman’s benefit”–Ward’s defense attorney should have objected to their presence. The appeals court agreed with Ward’s contention that the officers’ “show of gallantry influenced the jury to convict this defendant out of fear and sympathy, rather than because the State had proven its case beyond a reasonable doubt.” id. However, Ward has merely been granted permission to present evidence of such. Now comes the hard part.