Criminal Defense
Since 1993
Contact Us Now For a Free Consultation
Home
Articles
Your Constitutional Rights vs. The Pandemic

Your Constitutional Rights vs. The Pandemic 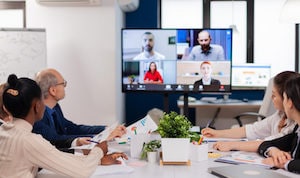 I love virtual court hearings. No need to drive to the courthouse. No need to hunt down a good parking spot. Think about how environmentally friendly these virtual hearings are? Everybody wins.

Most court hearings are designed to give the judge some update on the case. These updates can be called a “pretrial” or “docket sounding” or “status hearing” or “plea negotiation conference,” but the point is the same. We’re just telling the judge what his happening with the case. We have the pandemic to thank for particular technological efficiencies that we might have missed otherwise.

That being said, we can also take a good thing too far.

And that’s what happened in our case for today. We took this virtual court appearance thing way too far. So to understand our issue, we’ve got to start with the basics, back to the U.S. Constitution.

Specifically, the Sixth Amendment, which states the following:

“In all criminal prosecutions, the accused shall enjoy the right to a speedy and public trial, by an impartial jury of the State and district wherein the crime shall have been committed, which district shall have been previously ascertained by law, and to be informed of the nature and cause of the accusation; to be confronted with the witnesses against him, to have compulsory process for obtaining witnesses in his favor, and to have the Assistance of Counsel for his defense. [emphasis added]

The bold words above are what we lawyers call the “Right to Confrontation” or the “Confrontation Clause.” Either way, our government must have someone sit in front of that jury and raise their right hand and expose themselves to the cross-examination of the defense attorney. That’s the way things have been for hundreds of years.”

But now, we have a pandemic.

How do you confront someone if they’re not allowed in the courtroom due to health concerns?

In E.A.C. vs. State, a juvenile was convicted of attempted robbery during a trial in which all of the witnesses testifying against him did so virtually via Zoom. Here’s what happened:

A juvenile named E.A.C. and others planned to rob another student known to wear nice Apple Airpods and had a decent vape pen. So, they followed the victim into the bathroom, cornered him, and beat him to the ground, with E.A.C. hitting him in the face.

E.A.C. was on video conducting the beat down (yes, these school kids always have their phones ready to record drama). A teacher heard the commotion and entered the bathroom to break it up. E.A.C. v. State, 2021 Fla.App.LEXIS 9891 (Fla 4th DCA 2021).

The attempted robbery trial took place in March of 2020, in the middle of a pandemic, when the courthouse was closed to the general public. So, the witnesses against E.A.C. were not allowed in the building. And ordinarily, if the witnesses are not physically at the trial to testify, the case would be thrown out.

But, the Florida Supreme Court decided to suspend the usual rules of courtroom procedure—which do not (typically) permit testimony via Zoom—and allow certain hearings to be conducted remotely. This was one of those hearings—a juvenile trial with witnesses testifying via Zoom.

At E.A.C.’s “trial,” the teacher that broke up the robbery testified via Zoom, as did the victim who was beaten in the face as he was on the ground (there should be a special crime for this type of beating, right?).

After losing the trial, E.A.C.’s defense lawyer filed an appeal, claiming that the testimony of the witnesses via Zoom violated his 6th Amendment right to confront a witness.

This case is not the first time our courts have had to deal with witness testimony via video. That prize goes to an old case known as Maryland v. Craig, where our U.S. Supreme Court authorized video testimony of sexually abused children in cases where it would be too traumatic for the child to be in the same courtroom as their alleged abuser. 497 U.S. 836 (1990).

Craig was the first time we realized that the concept of “confrontation” could mean something other than a face-to-face, in-person talk with the accused. And let’s face it, if a child is accusing you of anything, you’re probably going to prison, so Craig stood for the proposition that you could go to prison without ever having the opportunity to confront the person sending you to prison face-to-face. It seems un-American.

So, the 6th Amendment does not guarantee defendants face-to-face meetings with accusing witnesses. Still, the Craig decision required the prosecutors to jump through some hoops to assure the court that the child would be unable to “reasonably communicate” while facing the defendant at trial. The Supreme Court stated that such video testimony would only be permitted on a case-by-case finding of necessity. Craig at 857-58.

The defense attorney for E.A.C. was complaining on appeal that the Zoom testimony which convicted his client of attempted robbery was not vetted in the manner laid out in Craig. It wasn’t done on a case-by-case basis, quite the opposite.

No such courtesy was paid to E.A.C. On the contrary, his accusers testified via Zoom not out of “necessity,” but only because of a pandemic.

How much of our constitutional rights can we tolerate going out the window in the name of a pandemic?

The court upheld the use of Zoom in E.A.C.’s conviction. Still, it cautioned that “this opinion should not be construed as a license in the future to avoid the strictures of witness confrontation as set forth in Maryland v. Craig. There should be a clear correlation between the existence and severity of the exigency and the latitude given to the trial court. The longer the exigency lasts, however, the more demanding we should be in allowing that accommodation to continue. As Justice Felix Frankfurter noted many years ago, ‘The history of liberty has largely been the history of observance of procedural safeguards.” As the exigency recedes, so should any allowance of any emergency accommodation.” Id. at 23-24.

I believe the majority in E.A.C. got it wrong. They should not have allowed virtual testimony.

Judge Cory Ciklin disagreed with the majority’s opinion and found that the Zoom testimony violated E.A.C.’s constitutional rights. His reasoning was simple–our criminal courts must follow the procedures set out in Craig. One of the many cases he cited was United States v. Yates, 438 F.3d 1307 (11th Cir. 2006). In Yates, a trial court permitted testimony from witnesses in Australia who were unwilling to travel back to the U.S. to testify.

The conviction in Yates was thrown out on appeal because “where a defendant’s right to confront a witness against him will be affected, the determination of whether a particular case requires a departure from usual procedures must be made, by the trial court, on a case-by-case basis. Craig, 497 U.S. at 854.”

Again, in Yates, as in E.A.C., the court did not follow Craig.

My hope is that, as we continue to navigate our new normal, our courts will still look to old cases like Craig to maintain our procedural safeguards.